When I started learning Mandarin last year, it's not something that I sincerely expected to be able to be proficient in. I'm still a long way from proficiency, but this year of learning has taught me some wonderful things, not only about language, but also about the parity by which language can mirror our cultural assumptions, and how powerful it can be in questioning the unspoken (and myopic) notion of "common sense". Mandarin is simply an amazing language, filled with amazing constructions and wonderful phrases.

This post is basically a list of resources that I have found valuable during my time learning, in the hope that it will aid other learners that seek to study.

Starting out requires some drive. The most important thing is to get a solid understanding of basic Chinese grammar without boring yourself to death reading grammar rules that you won't even use until later.

I was quite lucky to have a friend recommend the Pimsleur technique to me just before I got started in earnest. There's a lot of marketing bullshit around it, but basically, in every lesson, you learn some phrases, and repeat some old ones to refresh your memory. These phrases contain some new words. This way, you start to get some feeling for Chinese grammar without ever reading a grammar book, and you start to learn new words (which, in most cases, are actually pretty useful). By the time you've finished Phase 1, you will be able to have some (basic) intelligible conversation, which is a great motivator.

One really sucky thing about Pimsleur is it has no reading component, even an optional one. There are unofficial transcripts in a few places, but the company producing Pimsleur seems to send DMCA notices to anyone that has them hosted. My recommendation, if reading matters to you (it should, it's very fulfilling), is to look up the english descriptions in MDBG, find the characters, and find somewhere to put them down for study.

Quizlet is also an awesome resource to help you in your learning. I write down all new phrases that I learn as I hear them, in all configurations, and then put them in a Quizlet set. I usually practise them with the flashcards on my commute. It also understands Chinese, and can do text-to-speech on the characters if you like. I recommend putting the pinyin next to the tones in parenthesis, Quizlet is smart enough to not put these in the text-to-speech output, and it also doesn't require them as part of your answers in tests.

I'm also lucky to work in a company that has a lot of Chinese-speaking employees, which means that I usually get to speak to someone in my broken Chinese at least once or twice a day. I also feel very grateful to my wife who continues to motivate, encourage, and correct me greatly along the way. Just being able to use what you've learned is an invaluable source of motivation.

Find someone who speaks Chinese and is willing to help you occasionally. Even that occasional push will drive you forwards and make you proud of your achievements.

Hanping is an awesome dictionary using CC-CEDICT (you can also purchase the ABC dictionary for use in the app), an open source Chinese to English dictionary. I used to almost exclusively use MDBG, which we will go into later, but this has taken over as my favourite app for a few reasons.

Some of those reasons include:

embermitre, the developer of the Hanping set of apps, also has some very useful related apps, for example the Chinese camera, and the popup translator. None of these apps are free, but they are totally worth it if you are serious about studying Chinese.

MDBG also uses CC-CEDICT. Unlike many other dictionaries, its entries are almost strictly about equivalent words, not descriptions of meaning or etymologies. It also contains a lot of information about colloquial phrases, which is largely lacking in other dictionaries that I've tried. MDBG is a great reference dictionary when you see a Chinese word and want to know what it means quickly, without having to wade through more information than you need. It's also a great place to find Chinese equivalents to English words, although you might want to narrow them down further by cross referencing with Youdao to determine subtle mearnings.

The Zhongwen Chrome extension also uses CC-CEDICT, and allows you to hover over Chinese and get a translation as an overlay, which allows for a quite efficient workflow when browsing Chinese content on the web. Here's how it looks: 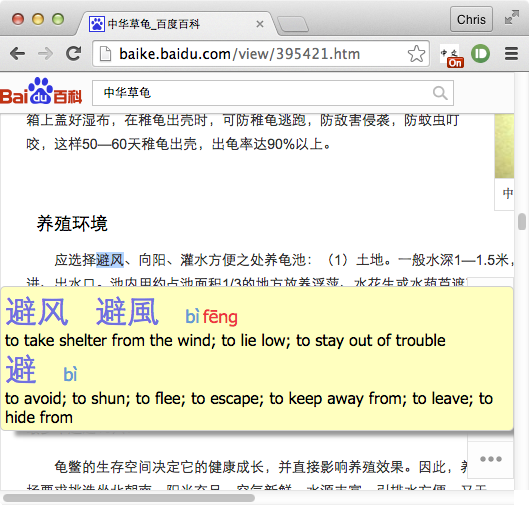 Youdao (有道) is a Chinese dictionary, mostly aimed at Chinese speakers. The Android app (sadly as of 2020 removed from the Google Play store) is pretty awesome, although the interface is all in Chinese, which might be intimidating if you can't read many characters yet. If MDBG doesn't understand your phrase and only gives the meaning of individual characters, there's still a good chance Youdao will.

Note that Zdic is all in Chinese, and sometimes quite fancy Chinese at that. It can be difficult to read, but it contains a lot of deep insights that you won't find elsewhere.

The dictionary provided by LINE is not bad, and the example sentences are generally pretty good. I've not used it enough to comment much, though.

One of the most motivational aspects of learning Chinese using the Pimsleur method is that you can quite quickly pick up conversational Chinese and use it in a reasonable way with other Chinese speakers. Unfortunately, while you may have the right idea about basic Chinese grammar, if you're anything like me, your vocabulary will be quite limited even after a year of learning.

Examples sentences are very important to give you some feeling about when to use which word, and how to use it. It has much the same function as Pimsleur for me, except it doesn't encourage structured learning. I mostly use these sites to learn idiomatic phrasing and vocabulary for a particular topic that I want to talk about.

Despite Ichacha (查查) pitching itself as an "online translation" tool, it's actually more like a dictionary that also has a great deal of example sentences.

I don't use the dictionary part much, so I can't vouch for its quality. The bit I can vouch for, though, and the best bit about Ichacha, is its vast repository of (human translated) example sentences. I have no idea where it gets them from, but the examples are numerous, and almost always excellent idiomatic representations of their English counterparts.

This is pretty much the same deal as Ichacha, just with a different set of example sentences and a better interface.

Tatoeba is another good resource that's solely focused on example sentences. It's human curated and is generally of good quality, but example sentences for Chinese are a bit lacking (examples for European languages are far more numerous). Good for finding basic sentences, but lacking a bit in quantity.

Jin Zhang, who teaches Chinese at MIT, has a pretty useful page about the subtleties of Chinese tonality.