When I write new code for open source projects, my general workflow is this:

Steps 3 and 4 are annoying, especially because Travis varies a lot in the time that it will take to spin up a worker to run the tests, even with the new container infrastructure. It wastes time that one could just be working on other things, not worrying about having to wait to merge. Wouldn't it be awesome if Travis just merged in automatically on build success?

GitHub has support for personal access tokens. We can generate one to allow Travis to push to our repository.

You can set access controls for this token in the next page. In our case, we only need to allow public repository access. 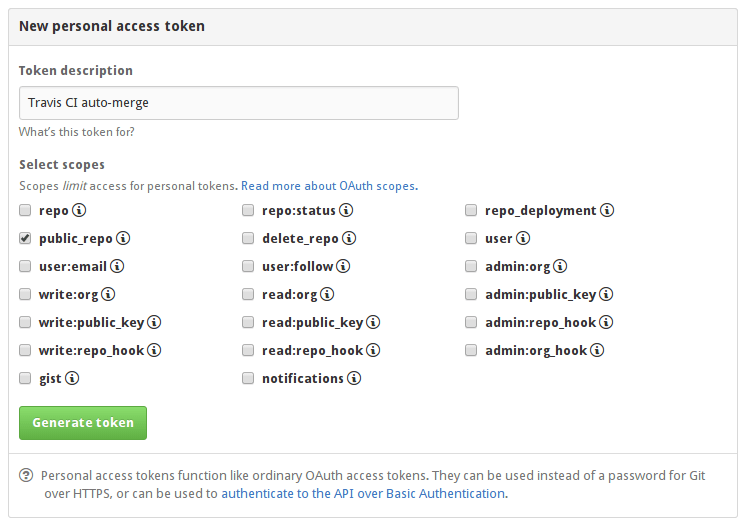 Once you've clicked "generate token", you'll be taken to a page where you can copy the token for use. Put it somewhere locally, you'll need it later.

First, you need to set up the travis gem. You can install it with gem install travis.

You can now encrypt the GitHub access token you generated earlier to the public key for the repository:

This will give you a long key to add to your .travis.yml. You can add it there now.

You also need to have a script to do the actual deployment. You can use the script I wrote here for that by adding the following lines to your .travis.yml, taking care to modify accordingly:

All things going well, now you should have auto-merge on successful builds! You can see an example of this working in the srt repo if you get stuck.