Here's an interesting issue I and Tejun looked at a few days ago that I thought might be interesting to share with a wider audience. I hope it can serve as an example that kernel internals aren't just a black box when it comes to debugging, and it's possible to work these things out with a little patience and a careful eye.

squashfs lives an incredibly versatile life. Many Linux users know it as the read-only filesystem that has powered almost the entire history of Linux Live CDs (excluding early efforts such as Yggdrasil and DemoLinux). Many Linux programmers also know it as a versatile filesystem for embedded use due to its support for transparent compression. Those looking at the history of squashfs changes inside the kernel will also see changes from Facebook, Google, and many other industry names, as it also serves a purpose serving production traffic at scale.

One thing we use squashfs for at Facebook is transporting large amounts of static data that compress well: bytecode, certain types of static resources, etc. We then transfer these squashfs images over the network to the servers providing compute power for the service, mount the squashfs mounts, and away we go.

Visualise such a situation: we've just finished transporting the squashfs images and are getting ready to use the files inside in the program. We go to load files from within this squashfs mount within the program, and usually all goes well. Sometimes, however, many of the program's threads seem to stall while trying to read data from this squashfs image, resulting in slower startup times. In this case, we found this when testing I/O limits as part of cgroup v2 work – in this case we expect I/O throughput to be reduced, but we don't expect applications to stall entirely. Take a look at the following two kernel stacks for two threads from the application, and have a think about what looks weird here.

Here's how one thread looks (derived from /proc/[pid]/task/[tid]/stack):

Here's how some other threads look – the stack is similar, but subtly different:

In the first stack, we're trying to read in data as part of a major fault. Essentially, this means that we want to read some particular memory which is backed by persistent storage, but don't have it loaded in to memory. As such, we have to actually perform I/O to service the request for data by loading it into main memory, and in this case the file is on a squashfs mount, so we need to call squashfs-specific functions (like squashfs_readpage) to access it.

In the second stack, we're trying to read a file from disk using the read syscall. That's what sys_read (frame 12) does, although it passes most of the hard work to vfs_read (frame 11). Eventually, again, this works out that it should call squashfs-specific functions to read from the squashfs filesystem, resulting in the call to squashfs_readpage at frame 5.

Both stacks end in schedule(), which is a thin wrapper around the __schedule() function inside the kernel. __schedule() here is a way of voluntarily hinting to the kernel's CPU scheduler* well, kind of that we are about to perform a high-latency operation (like disk or network I/O) and that it should consider finding another process to schedule instead of us for now. This is good, as it allows us to signal to the kernel that it is a good idea to go ahead and pick a process that will actually make use of the CPU instead of wasting time on one which can't continue until it's finished waiting for a response from something that may take a while.

* schedule() is also used in some involuntary cases when TIF_NEED_RESCHED is set, but I could write a whole other post on preemptible kernels, TIF_NEED_RESCHED, and the like, so I won't go into that here. You can tell the difference here because this path is not in interrupt handling, which is the main place where involuntary context switches using schedule() happen. We also have some kind of "implicitly voluntary" cases – the main one being returning from a syscall. schedule() can also be called as part of preempt_enable (when we enable preemption) and cond_resched (which is basically just schedule() with more checks up front). If this note was confusing, don't worry, you don't need it to understand the rest of the post :-)

Disk or network I/O are major reasons that an application may voluntarily signal the scheduler to choose another process, and that's certainly what we see in the first stack – io_schedule() is a wrapper around schedule() that also does some statistical accounting for things like iowait, and indicates that the reason we chose to schedule() is because of I/O.

The second stack gets more interesting when you look at it in comparison with the first one, and when you consider that many threads are blocked in it. We've called schedule(), as before, but this time it's not because of I/O. Instead, the reason we schedule is because of something related to getting data from the squashfs block cache as indicated by squashfs_cache_get being the frame above the call to schedule().

Looking at fs/squashfs/cache.c, which is where squashfs_cache_get is defined, we can see from the code structure that squashfs internally uses a fixed-size cache as part of its read/decompress path. If we read into squashfs_cache_get a bit, we start to see where we might become blocked in this function. One place that clearly stands out is where we explicitly wait until a cache entry is available for use:

wait_event here is what we're really looking for – it's where we start waiting for a cache entry to become available so that we can use it. If no cache entry is available we simply wait and then notify the CPU scheduler (through the aforementioned schedule()) that it should do something else until we're ready. This brings up two related questions: how big is the cache? How many blocks can we read simultaneously before we end up waiting here?

Looking at the the next frame up, squashfs_get_datablock() that calls squashfs_cache_get(), we can see that the cache being used in the blocking stack is hardcoded to be msblk->read_page:

All we have to do now is find where msblk->read_page is initialised to find the cache size. Searching for ->read_page reveals this piece of code in fs/squashfs/super.c:

Now the big question is what the value returned from squashfs_max_decompressors() is. Looking at its definition shows it in three files:

Usually when there are multiple definitions of a single function in the kernel, it means that there is a config option which decides which is eventually passed to the compiler. This case is no exception, and we can see the following in fs/squashfs/Makefile:

Well, this is interesting. Since our kernel was configured to use a single squashfs decompressor, and now we know that the number of decompressors is directly used as the number of cache entries, we also now know that this means that we can only do one major fault or read at a time within a block as any further reads occurring at the same time will become blocked in the wait_event() code mentioned earlier. This clearly shows as being the reason why we get descheduled from the CPU, and thus the reason why overall forward progress of our program stalls. 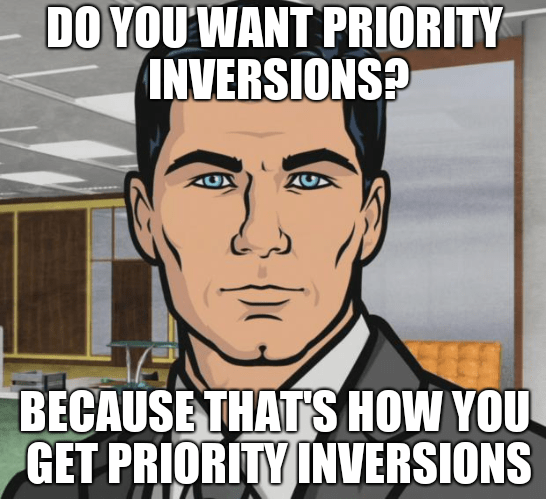 This setting probably makes some sense in squashfs's embedded usecases where memory savings are critical, but it doesn't really on production servers. As of kernel 4.16, using a single decompressor is still the default decompressor setting for most architectures when you enable squashfs. I'll likely start a conversation about changing this for an upcoming release.

So, how should we fix this? In most cases, changing your kernel config to use CONFIG_SQUASHFS_DECOMP_MULTI should work around this issue well enough by introducing higher concurrency limits (the number of online CPUs multiplied by two, as mentioned above), thus avoiding having to wait for the cache entry to become free to continue reading from squashfs. This is still somewhat of a workaround for the way that squashfs does decompression, though, rather than a real fix.

While the suggested workaround will probably be fine for most use cases, it's worth also pointing out that if you are thinking about starting a new production service that needs transparent compression, you might consider using btrfs with compression support – it's generally more featureful and has been built with consideration for modern situations that were uncommon or didn't exist when squashfs was invented, like resource enforcement with cgroups, huge numbers of accessing threads, etc, etc. In my experience there are generally fewer surprises when using btrfs nowadays compared to squashfs.

I know plenty of people who get stuck when encountering issues that seem to lead into the kernel. Hopefully this post can help you become more familiar with some of the common tropes encountered when looking at kernel issues, and possibly give you the confidence to dive into a few yourself :-)